And Now, Mr. Serling:
“Mr. Burgess Meredith is no stranger to the Twilight Zone, but his role in next week’s story is a unique one, even for him. The Time will be the future, the place just about anywhere where men have been taken over by a machine state. Our story is called ‘The Obsolete Man.’ It may chill, it may provoke, but we’re certain it will leave a mark. Next week on the Twilight Zone, ‘The Obsolete Man.’” 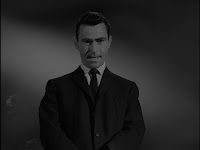 “You walk into this room at your own risk, because it leads to the future, not a future that will be but one that might be. This is not a new world, it is simply an extension of what began in the old one. It has patterned itself after every dictator who has ever planted the ripping imprint of a boot on the pages of history…since the beginning of time. It has refinements, technological advancements, and a more sophisticated approach to the destruction of human freedom. But like every one of the super states that preceded it, it has one iron rule: logic is an enemy and truth is a menace. This is Mr. Romney Wordsworth, in his last forty-eight hours on Earth. He’s a citizen of the state but will soon have to be eliminated, because he’s built out of flesh and because he has a mind. Mr. Romney Wordsworth, who will draw his last breath…in the Twilight Zone.” 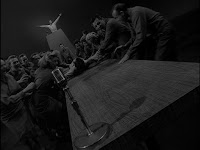 The next day. The Chancellor arrives in the court room to start his work for the day. To his horror he finds that his podium is occupied by another man. The new chancellor informs him that his declaration of a deity renders him unable to perform his task and therefore declares him obsolete. The former chancellor begs like a child for his life as a mob of mindless zombies converge on him and rip him apart.

Rod Serling’s Closing Narration:
“The Chancellor—the late Chancellor—was only partly correct. He was obsolete. But so was the State, the entity he worshipped. Any state, any entity, any ideology that fails to recognize the worth, the dignity, the rights of man, that state is obsolete. A case to be filed under ‘M’ for mankind…in the Twilight Zone.”

Commentary:
For the second season closer Serling turned in this Orwellian horror story of a machine-like society that disposes of anyone or anything deemed unnecessary by the all-powerful forces of the State. I have always enjoyed this episode but it’s definitely not without flaws. If it is didacticism that Serling strives for then he loses his audience almost from the start. The world he creates here pushes the tolerance of the audience. It is ominous simply for the sake of being ominous. A world populated by mindless, monotone citizens absolutely devoted to a callous, faceless government. The audience never really gets the sense of what the structure of this imagined future is supposed to accomplish, or what exactly constitutes a person or idea as being “obsolete.” Serling simply fills his dystopia with any restriction of personal freedom that allows him to get his point across which is simply that totalitarianism is bad and a lack of free will is never fun. His plot is also littered with implausible circumstances, the most notable of which is that the Chancellor diligently accepts Wordsworth’s invitation to join him in his room on the night of his execution. Why doesn’t the Chancellor bring any kind of entourage or security with him? What if he doesn’t show up at all? This would spoil Wordsworth’s plan and would end Serling’s script rather abruptly. But despite all of these limitations this episode still manages to work quite well and, in many ways, still evokes in the audience the moral dread that Serling intended.
Now that I have pointed to the flaws in this episode and probably given the impression that it’s basically celluloid garbage I can move on to why I think it’s great.
He may over-indulge the message here but Serling saves “The Obsolete Man” by filling it with sharp, powerful dialogue between Fritz Weaver and Burgess Meredith. The dialogue works so well because its focus is not on Serling’s message but simply on the difference of ideals between two characters, which is why the tension between these two men seems completely natural instead of forced in order for Serling to make his point. Both characters have lengthy, carefully sculpted monologues saturated with the type of rhetoric that makes Serling’s work memorable. 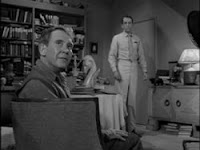 Casting was a key element in this episode. While Serling’s dialogue is amazing it could have been worthless in the hands of lesser actors. So Silverstein and the producers turned to familiar faces as a safety net to assure great performances. Making his third of four appearances on the show is veteran actor Burgess Meredith. All of the characters that Meredith has portrayed thus far on the program have been lowly, bookish types in varying degrees of seriousness. Although some may feel that “Time Enough at Last” is his best effort on the show I have always enjoyed him best in this episode. Making his second and final appearance on the show is Fritz Weaver. In Season One’s “Third from the Sun” Weaver plays a quiet family man trying to keep things afloat while he and his family attempt to leave their planet in the face of a looming nuclear holocaust. Here he plays the complete opposite: a boisterous, unforgiving authority of the State. He displays an impressive range of emotions in this episode and the result is one of the most interesting characters to ever appear on the show. His monologue in the opening scene has always been one of my favorites. 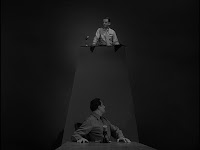 But the hero of this episode is director Elliot Silverstein. This is his first of four episodes for the show. It’s interesting to point out that his other three episodes (Season Three’s “The Passerby” and “The Trade-Ins” and Season Five’s “Spur of the Moment”) are all episodes that also focus on dialogue and acting rather than story. And like “The Obsolete Man” most would have worked well on the stage (with the exception of “Spur of the Moment,” which features a chase scene on horseback in which the audience isn’t supposed to see the pursuer’s face). Silverstein had a background in theater and began his career as a television director in the live dramas of the fifties. “The Obsolete Man” features only two sets, which are radically different from one another. The first and last acts take place in a large, open courtroom which features sharp, expressionistic shadows reminiscent of the German horror movies of the 1920’s. There are only two pieces of furniture in this room: a long, narrow table in the center of the room and the Chancellor’s tall, obnoxious podium at the far end of the table. The only other visible set piece is a twenty-five foot double door that opens into the courtroom. The walls are covered in black velvet and an off-screen light fixture placed above the door appears to be only source of light inside the courtroom. The government officials, there are about a dozen of them places randomly around the large room, are all dressed in drab, colorless uniforms and stand expressionless behind Wordsworth. The room is cold and unwelcoming. This set is highly effective to both the scene and the story and gives the audience an immediate idea of what this future society is like.
Act Two takes place in Wordsworth’s apartment. A tiny studio apartment consisting of a single room cluttered with furniture and lined wall-to-wall with overflowing bookshelves, it is a striking juxtaposition to the lifeless courtroom in the other two scenes. The cozy, cluttered room feels immediately warm and welcoming and it gives the audience a better understanding of Wordsworth’s personality. In many ways these two sets are the unspoken stars of the episode.
While it has some sore spots, “The Obsolete Man” is still a remarkable episode and a good choice for the season finale. The final scene, in which the Chancellor is judged and then presumably ripped apart by his comrades, was an extremely bold choice for the show, especially for 1961. It’s weird and vague and doesn’t really make sense but it somehow works perfectly. It closes out the season on a high and shocking note and leaves the audience talking all summer long while they wait with anticipation for the start of the third season.
If The Twilight Zone started on a high note with Season One, then it’s safe to say that it hit its stride both creatively and commercially with Season Two. Season Two produced many of the show’s best including “Eye of the Beholder,” “The Howling Man,” “Nick of Time,” and “The Invaders” to name a few. While not every episode is a masterpiece (“A Thing about Machines” and “The Man in the Bottle” among the sore spots), and don’t forget the experiment with videotape that proved unpopular with nearly everyone, the show began to grow into its own during this season. The viewership had grown and the pacing was faster. The producers settled on an opening theme which would become one the show’s trademarks and one of the most well-known pieces of popular culture to ever exist. Serling began to appear onscreen during his opening monologues (also one of the show’s trademarks that has become a universally known and often mimicked phenomenon) and the monologues themselves grew shorter and tighter and were officially given the “…in the Twilight Zone” closing tagline. Also important in Season Two were writers Richard Matheson, Charles Beaumont, and George Clayton Johnson. All three made contributions to the first season but their personalities and writing styles became known to the audience and became part of the personality of the show. When accepting the Emmy for Outstanding Writing Achievement in Drama that summer, Serling held up the award and shared its credit with all three men and stated that they could “carve it up like a turkey.” Director of Photography George T. Clemens also nabbed an Emmy for his work on Season Two. The show also won the Hugo Award for this season.
Unfortunately, the show would begin to unfold toward the end of the next season for numerous reasons. But for now, with two groundbreaking seasons and sixty-five episodes under its belt, The Twilight Zone drifted quite comfortably into its third season.

Notes:
--As mentioned, director Elliot Silverstein also directed Season Three’s “The Passerby” and “The Trade-Ins” and Season Five’s “Spur of the Moment.” He would go on to direct feature films including 1965’s Cat Ballou with Jane Fonda and Twilight Zone alumni Lee Marvin. His last work in television was as the director of four episodes of HBO’s seminal anthology show Tales from the Crypt.
--Burgess Meredith also appears in Season One’s “Time Enough at Last,” Season Two’s “Mr. Dingle the Strong,” and Season Four’s “Printer’s Devil.” He appeared in two episodes of Rod Serling's Night Gallery, "The Little Black Bag" and "Finnegan's Flight."
--Fritz Weaver also appears in Season One’s “Third from the Sun” and in the episode of Rod Serling's Night Gallery titled "A Question of Fear." Weaver also recorded a reading of Rod Serling's prose adaptation of "The Mighty Casey" for Harper Audio in 1992.
--“The Obsolete Man” was adapted into a Twilight Zone Radio Drama starring Jason Alexander.
--This marks the second of three Rod Serling appearances on screen at the end of an episode (excluding promotional material). The first time was the Season One closer "A World of His Own" and the third and final time was the third season episode, "The Fugitive."